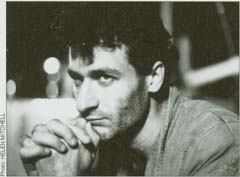 As we all know, the best way of telling whether a drama programme works is if the viewers are more interested in whats going to happen next than in counting how many times the boom comes into shot or how many actors are moonlighting from Away Laughing and Shark In The Park.
So while Undercover had its fair share of flat spots in the script and acting departments, it also contained sufficient dolops of suspense and intrigue to keep some of us interested.
The basic plot -- cop leaves family and friends inTimaru to go undercover in Wellington to find things arent as black and white as he first thoughtwas standard, based as it was on a real-life
situation and any number of cop shows from overseas, and for the most part both the dialogue and acting were credible. The heros boss had the most trouble with being convincing, so it seemed fair that the majority of the clunky lines should go to him.
But the rest of the leads and supporters got the hang of it and Undercover rattled along. The highlight -- in as much as you can have a highlight in a show that was largely shot at night -- was when the heros former girlfriend blew his cover -- a great moment, handled well.
Add to that handy hints on how to rob a chemist, nicely lit Wellington-by-night shots and the tasteful lack of gratuitous sex and violence, and Undercover scores high marks. And of course there were no booms in shot, but the only Away Laughing regular missing seemed to be Phineas ODiddle.

Comments, suggestions or questions are welcomed at info@nzvideos.org