Lord of the Rings: The Fellowship of the Ring 20th Anniversary First Day Covers 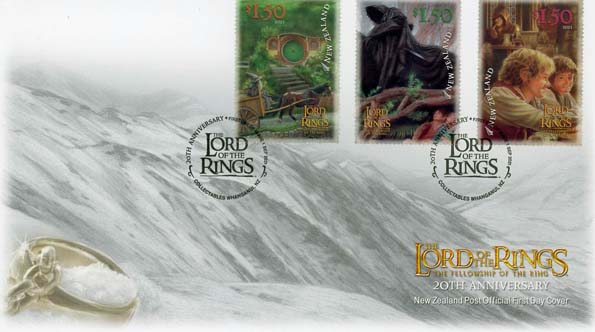 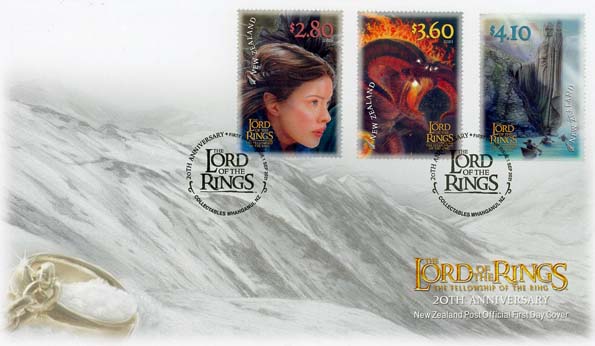 On this date, these First Day Covers and six miniature sheet covers were issued

The Stamp and cover designs are by Sacha Lees , Weta Workshop of Wellington

$1.50 The Journey Begins - In the region of The Shire, the village Hobbiton is home to hobbits Bilbo and Frodo Baggins.
Scenes here were filmed near Matamata on the private Alexander Farm, where rolling hills provided an idyllic backdrop.

$1.50 The Prancing Pony - As their quest begins, Frodo and his hobbit friends Sam, Pippin and Merry drink ale at the Prancing Pony in Bree, where they first meet Aragorn.
The Bree scenes were filmed at former army camp Fort Dorset in Seatoun, Wellington.

$1.50 Hiding from the Black Rider - Taking cover in a hollow among the roots of a tree, Frodo and his friends evade an envoy of Mordor.
Surprisingly, this forested scene was filmed not in a remote location but in Wellington city's Town Belt.

$2.80 Flight to the Ford - After Frodo is stabbed, Arwen the elven princess gallops with him on her horse through a prairie and a wood to the safety of a river.
The scene was filmed at the Shotover River, which flows through the rocky gorge Skippers Canyon, near Queenstown.

$3.60 The Bridge of Khazad-dum - Perhaps the movie's most theatrical moment takes place in a subterranean labyrinth,
the Mines of Moria, where Gandalf turns and cries, "You shall not pass!" to the fire-breathing Balrog.

$4.10 The Gates of Argonath - Journeying along the River Anduin in three boats, the Fellowship passes two gigantic stone statues guarding the northern border of Gondor.
This epic scene was filmed in the Kawarau Gorge and Kawarau River near Queenstown.

Comments, suggestions or questions are welcomed at info@nospamnzvideos.org, but delete the nospam portion before sending